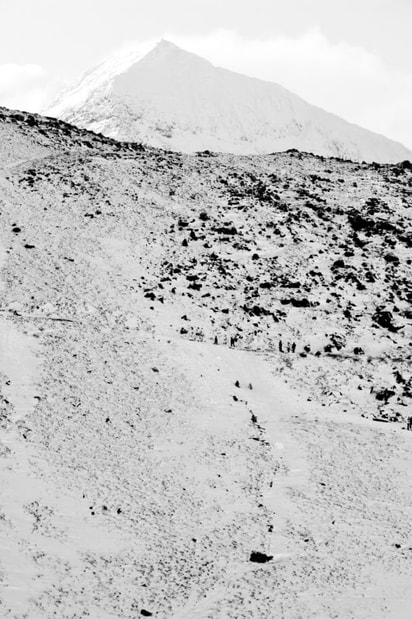 Summit of Yr Wyddfa (Snowdon)
From my front yard I am fortunate enough (on a clear day) to see the summit of the highest mountain in Wales. Snowdon (Welsh: Yr Wyddfa) is also the tallest landmark on the British Isles south of the Scottish Highlands. It’s particularly beautiful when it lives up to its name and  capped in white which, traditionally, is about half the year. As Richard Jones wrote in 1829 in his verbosely titled book ‘An Accurate Account of Dolgelley and Caernarvon, Cader Idris and Snowdon with the Principal Inns, Roads, etc. Also an Itinerary of the Roads, etc’:

“Most of the old writers who have occasion to mention this mountain, assert that it is covered in snow all year round; but this is by no means true, for this, as well as the other mountains of Wales, are generally entirely destitute of snow from the beginning of June to the latter end of October, at which time it commonly begins to fall.”

This much is unchanged: stepping out of my front door yesterday morning, during the first week of November, it cheered me to find the upper 250 metres or so coated with a liberal dusting of fresh, clean white snow looking upward to a bright blue sky. And it was noticeably colder. Once again the first snowfall of the winter is on time. What has changed since Richard Jones wrote, however, is that the snowfall melted within 24 hours. To be replaced, no doubt, sometime in the next week or two by another snowfall which in turn will also melt tout de suite. And so on until about April. Landscape photographers visiting Snowdonia in winter are no longer guaranteed what they have come to expect; snow capped peaks in the background of their images. Seven or so years ago, Dr Clive Walmsley of the (then) Countryside Council for Wales commented on BBC Wales News:

"We've been recording the snowline on the mountain for the last 14 years and over that time we've seen a distinct downward trend in the snow cover, not only in the height at which the snow is occurring but also in the season..........the season is getting shorter and the amount of snow cover on Snowdon is declining as well.............We're linking that to the change in temperature, the rising temperature.............We've noticed particularly in the spring period a two degree rise in temperature on Snowdon."

What’s interesting to me isn’t just the science behind a warming world or mountain range, it’s having first-hand observation of the cognitive dissonance exhibited by a, to be fair, minority of those who, unlike me, have lived their entire lives in the shadow of the mountain. They’ll readily confirm that the snow capped peak used to be a fixed feature for up to half a year, but is now an irregular, unpredictable event. They’ll enthusiastically recall the mammoth snowfalls of yesteryear, the likes of which haven’t been observed for some time. When pushed, they might even acknowledge that the instruments used to measure the weather patterns are calibrated correctly and the data collected by suitably qualified people. Nevertheless, when the subject of climate change is brought up they seem obliged to follow up with a stab at dissonance reduction; claiming, apparently confidently, that climate change or global warming or whatever you want to call it is a myth perpetuated by (variously) 'poor science' or 'sunspots' or 'green industry' or 'government' or the 'United Nations' or some such. I've heard all of these. They read about it in the newspaper. Usually something like the 'Sun', 'Daily Mail', or 'Express', none of which are known for their accurate science reporting.

This will be followed a few minutes later by some equally small talk on the unusually mild winter we’re having once again.  ​
​Original images and written content © Gary Hill 2014. All rights reserved. Not in public domain. If you wish to use my work for anything other than legal 'fair use' (i.e., non-profit educational or scholarly research or critique purposes) please contact me for permission first.