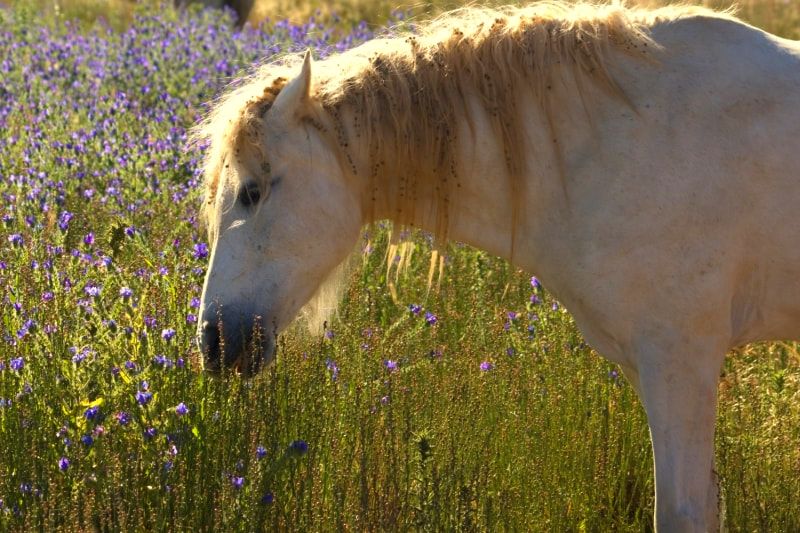 ​Whenever I show people this image of a brumby (wild horse) they usually comment on its idyllic, fairy tale mood. Some liken it to a unicorn without its horn. Nothing could be further from the truth, however. Although it doesn't look it, it is a scene more akin to Tennyson's "nature, red in tooth and claw". I found this scene late one afternoon in October 2010 in the Flinders Ranges in South Australia. After several years of the severest drought in a century, the region had experienced the highest spring rainfall ever recorded. Vast swathes of the normally arid landscape were carpeted with wildflowers, some of which had not been seen for more than a decade. Brumbies are just one of the non-native animals introduced to the Flinders Ranges; there are also feral camels, rabbits, goats, cats and foxes. I saw all of these except foxes, though many were bleached bone skeletons, having been unable to dodge either predators or thirst. With the obvious exception of camels, how what remained of these species had survived in such severe drought conditions is at least partly testament to the power of natural selection, which had undoubtedly 'sculpted the gene pool' (to borrow a phrase from Richard Dawkins), allowing these local populations of their species to successfully adapt, over a period of less than 200 years, to the far harsher environment than which they had originally evolved.

Certainly, non-native Homo sapiens, stripped of our technological crutches, would not have fared as well. And with the rain came different kinds of problems; dirt roads had been washed away creating trenches and pot-holes the size of children’s paddling pools. Rules like driving on the left were abandoned. Even the highest, widest-tyre four wheel drives were unable to steer a straight course on the tracks. Even worse, the wet weather had hatched a locust plague of Biblical proportions, looking like clouds of low-lying black smoke in the distance; the fear was that they would head southward to farmland where they could decimate the state's agricultural output. Locusts eat three times their body weight every day. Fortunately for the Flinders Ranges and the rest of our planet, this is something even the most avaricious humans cannot match.
Original images and written content © Gary Hill 2010. All rights reserved. Not in public domain. If you wish to use my work for anything other than legal 'fair use' (i.e., non-profit educational or scholarly research or critique purposes) please contact me for permission first.