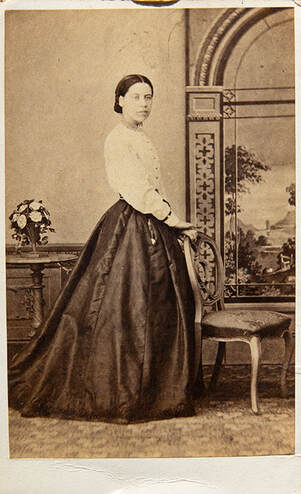 ​I have both a scientific and historical interest in Charles Darwin and have written several extended essays concerned with his work, for example here, here and here. A short while ago I read a book dealing with Darwin's attitude toward and use of photography in his published work, 'Darwin's Camera: Art and Photography in the Theory of Evolution', written by the art historian Phillip Prodger (Oxford University Press, 2009). A little later I was asked to photograph a collection of vintage photographs and to arrange their sale on behalf of a charity. The image above caught my attention straight away. I cannot be certain who she is, other than she attended a photographic studio in Bromley, on the southern outskirts of London in about 1869, though, as we shall see, I suspect she is related to Charles Darwin. I didn't particularly notice the image for its aesthetic value, though I do enjoy this solemn Victorian style. It's fairly typical of the background, stance and serious demeanour of many full length carte de visite portraits of the time. No, what initially captured my attention was the name of the photographer, having recently read about his brief professional connection with Charles Darwin from Prodger's book.

In the late 1860s, Henry Thomas Melville (b. 1833) owned a studio in Bromley, which is only a few kilometres to the north of Darwin's home in the village of Downe. When he was writing 'The Expression of the Emotions in Man and Animal' (at the same time as writing 'Descent of Man'; the two books were originally intended to be combined) Darwin commissioned Melville to take some photographs of muscular contractions of the face and head that he had observed were shared by humans and other primates. ​Indeed, it is not widely appreciated that Darwin was not only a pioneer of evolutionary biology, he was also, in a more indirect way, a pioneer of photography, 'The Expression of the Emotions', published in 1872, being the first scientific work to supplement text with photographs. Although the bulk of the photographs Darwin used were produced by the Swedish-born photographer Oscar Rejlander, using his wife and himself as models, one of Melville's images, of the forehead 'grief muscle' as Darwin coined it, made it into the book.

​The remainder of Melville's images are in the Darwin Archive and have the initials K.E.W. inscribed on them. It is believed that Darwin's niece, Katherine Euphemia Wedgwood (later Farrer), known to the family as Effie, was Melville's model. There are no publicly available photographs of Effie from that time to compare with those taken by Melville but we know from, from a variety of sources, including the diaries of Darwin's wife Emma and daughter Henrietta, as well as miscellaneous correspondence, that Effie was a frequent visitor to the Darwin family. As a child she was particularly close to Darwin's daughter Annie who died in 1851 aged 10 (Effie was two years older). Emma gave Effie Annie's embroidery basket as she thought she would “like to possess some little keepsake out of poor Annie’s treasures. She was always the one Annie loved best.” Also, from correspondence in the late 1860s it is apparent that Effie had an interest in photography. Arguably, there is a likeness between the unknown woman in the above photograph and Katherine Euphemia Wedgwood.
​Curiosity aroused, I delved further into Henry Melville's life and career and uncovered an interesting though sad tale of coincidence and tragedy. In 1870, shortly after working with Darwin, Melville, his wife Mary Ann and their 2-year old son moved to Mary Ann's hometown of East Grinstead in Sussex, where Thomas opened a studio. There was already a photographic studio in the town run by Alfred Gear (who worked under the name Alfred Francis), a former coach painter who had taught himself photography. Gear was not only a similar age to Melville but also coincidentally, married to a Mary Ann. They had eight children. Within the next three years, Melville and his Mary Ann had a further two sons and a daughter, while Gear and his Mary Ann added a ninth child. It would appear that Melville's business in East Grinstead was thriving early on as the census of 1871 shows that he employed a live-in servant.
​
In June 1874, 43-year-old Alfred Gear committed suicide by swallowing potassium cyanide in his darkroom. This chemical was widely used as a fixing agent in the early days of photography. There was apparently no warning of this happening, and it occurred just a few minutes after he had taken an order from a customer. This left Melville, in bittersweet fashion, as the sole photographer in the town which would have have further enhanced his business. However, in a further cruel twist of fate, Melville himself died less than four years later of natural causes at only 45-years of age, leaving Mary Ann with four children under 11 years. Remarkably, in an era of very few female professional photographers, she kept the studio in business for another five years, advertising herself as an architectural, portrait, landscape, & equestrian photographer.
Written content © Gary Hill 2021. All rights reserved. Not in public domain. If you wish to use my work for anything other than legal 'fair use' (i.e., non-profit educational or scholarly research or critique purposes) please contact me for permission first.