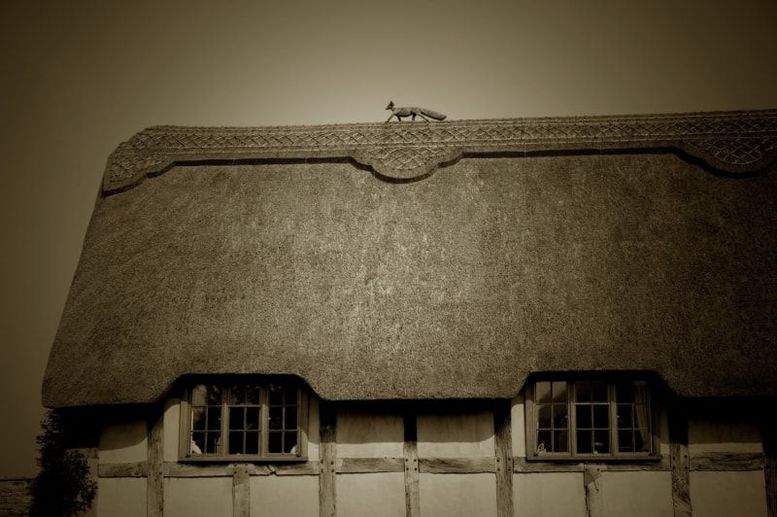 ​Five hundred thousand English pounds
For this old house and a piece of ground,
You and your wife have always planned
To settle down in Cotswold land.
Well you’d best come in, you’d best sit down
It’s such a long drive from London town
Would you like some tea now while I tell?
The reasons why I will not sell.
This stone built house that you call nice
Was gained at far too high a price,
For me to gaily sign away
What others toiled for night and day.
They hammered bluestone by the yard
And they found the rent when times where hard,
And they lived and died beneath the sun
Tending the fields you’re gazing on.
Well they’re all gone, but as for me
The wild hare still runs as free,
And at dusk the badger travels still
Ancestral highways on the hill.
I am as Cotswold bred as these
And I still need these field and trees,
And I need the soil that bore my race
And holds their bones beneath this place.
You say you’ll pay five hundred pounds
For this old house and a piece of land,
Well London’s about four hours for me
But in your 4 x 4 you’ll do it in three.

‘The Cottagers Reply’, lyrics by the English folk musician Chris Wood adapted from an original poem by Frank Mansell (1918-1979)


I had this song/poem in mind when taking this photograph. It concern the cultural damage caused by wealthy people buying second homes in rural areas for use as 'holiday homes' which then lay empty for most of the year and which they may eventually use for their retirement. This has a devastating effect on the viability of rural communities such as the Cotswold by depleting the housing stock available for purchase by local people and generally forcing house prices upward. Asking a shopkeeper in a Cotswold village store who owned most of the houses in the village, locals or newcomers, I got a brusque reply in the local rural lilt which I would have thought impossible through almost clenched teeth, "bankers with bonuses". At least I think it was 'b'....

It is a particular problem in the English county of Cornwall too. In the Isles of Scilly, 40% of the housing stock is said to be holiday homes. Similarly in parts of Scotland. The North West Demographic Survey of 1989 found that 31% of all the housing stock in Assynt was available only as a short-term holiday let and in some areas this was as high as 50%. In parts of Wales there is the added detrimental effect on the indigenous Welsh language. 8% of homes in the county of Gwynedd, where I live in Wales, are holiday homes, nearly all owned by English people, many of whom appear to have difficulty understanding the concept that Wales is a full-time country in it's own right, and not a theme park for their ilk, with it's own (obviously inferior) culture only returning to life when they have returned home.

​This average figure belies the real situation, however, for the distribution of holiday homes is not evenly spread. My partner, who has lived in the area all her life, tells me that when she was a child, the nearby small hamlet of Rhyd comprised perhaps 20 houses. Then, every single one was a holiday home. In winter it was an empty place, devoid of everything that local people had strived for over the past century as, ironically, the village had been purpose built in the 1860s to provide housing for the local quarry and farm workers and their families. Thankfully, the situation is better today. Only about half a dozen holiday homes remain. In two nearby coastal villages, Borth Y Gest and Morfa Bychan, however, some 60-70% of the houses are currently holiday homes. Little Englands beyond Wales. And when the house next door to us was bought by an English couple to modernise as a holiday let we were expected to endure the noise of power tools at 6.30am on a Sunday morning because "the weekend's the only time we can do the work, we both work all week......"

Although he was born in London, Frank Mansell came from a Cotswold farming family that could trace it’s roots in the region back to the 14th century. He spent most of life living in the village of Miserden, Gloucestershire where he worked as a telephone company linesman until retiring in 1975 and dying at the early age of sixty-one. He was a fast bowler for the nearby Sheepiscombe village cricket team for many years and for a short while had made a living drawing up astrological charts.

His first and only collection of verse, Cotswold Ballads, was self-published in 1969 with a foreword by his close friend, the author Laurie Lee (who had bought the Sheepiscombe cricket ground the previous year to prevent the land being developed). Frank and Laurie are said to have hawked the books in cardboard boxes around Cotswold village pubs and to have sold 2000 copies in the first week, an extraordinary achievement for a first-time poet with no reputation apart from occasionally being published in the local newspaper. A later edition, published in 1974 by an established publishing house features wood carving illustrations by Robert Ball. Out of print since, a good copy of Cotswolds Ballads now fetches upward of £60 on the second-hand market.

In 2000, the English folk singer Chris Wood modernised the lyrics and recorded a musical version of the 'The Cottager's Reply'. His intonation and the defiant emphasis he gives to certain words in the poem leave no doubt as to where his loyalties lie. As one reviewer quipped “This deals with the subject far better than a clenched fist and bellowed fuck off ever could”. Note that Chris Wood substitutes the words 'five hundred thousand pounds' for the 'ten thousand pounds' of the original. Both figures are entirely realistic and illustrate the effect that people's greed can have on local property values over the years. Have a listen.
And here you can hear Frank Mansell reciting the original version of the poem.


The farm remains he laboured on
And cherished like a lover,
The land remains but he is gone,
The sunlit days are over.

From ‘A Cotswold Lad’ by Frank Mansell
Original images and written content © Gary Hill 2014. All rights reserved. Not in public domain. If you wish to use my work for anything other than legal 'fair use' (i.e., non-profit educational or scholarly research or critique purposes) please contact me for permission first.