Gary Hill
Cwmystradllyn is a valley (cwm means valley in Welsh) in North-West Wales, lying between the high moorland of the serene mountains Moel Hebog and Moel-Ddu. Both are aptly named 'moel' which signifies bare, or bald, as in the bald head of men like myself and, surely enough, hardly anything more than a few centimetres high grows above 100m altitude on either flank. You could visit the valley at any time of year, at many random opportunities, and leave with the notion that it was shrouded in a permanent damp mist, like a Scandinavian sauna sans heat. It is this ambience that draws me here to walk and contemplate. The quietness and stillness of the isolation blends naturally with the acoustic effects provided by the humidity, accentuating the mildly manic but seldom heard squeal of the buzzard, contrasting with the ubiquitous and monotonous rasping of the black crow.

Cwmystradllyn was not always so quiet. For eight brief years from 1859-1867, the mountainous dead-end of the valley was a hive of industry as the native Welsh workers in the English-owned and managed Gorseddau Quarry laboured in the damp and cold to hammer and dig slate out of the hillside. A small village was built for them in 1857 overlooking the lake, and named Treforys, and according to the census of 1861 there were thirty-six houses laid out in three streets, each possessing a quarter acre of acidic, peaty, sodden soil. The opportunity to supplement a quarry labourer's wages by coaxing along a root crop or two and nurturing a few pigs, sheep or cows for meat and milk was always going to be an uneasy task. ​ 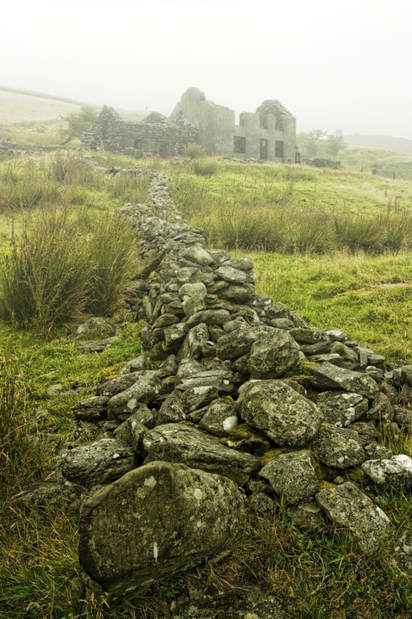 Ruins of Treforys
The poet R S Thomas describes the futility of farming the hills of North Wales so well in "The Minister":

This is the land where they burn peat
If there is time for cutting it,
And the weather improves for drying it
And the cart is not too old for carrying it
And doesn’t get stuck in the wet bog.

By the next census in 1871 the village had been abandoned.

After extraction the Gorseddau slate was transported a few kilometres down the hillside by a horse-drawn railway to the the slate mill at Ynys Y Pandy, built in 1856-1857 by Evan Jones of nearby Garndolbenmaen. Because the Gorseddau slate was of poor quality, it was not suitable for hand milling into roof slates and so the quarry was unable to take advantage of this relatively new and burgeoning market. Instead, the slate slabs were used extensively for more traditional purposes such as flooring, window sills and gravestones, even urinals, but in the eight years of operation, the quarry never returned a profit. Although in 1860 a little over 1800 tonnes of slate were produced this had dwindled to less than 23 tonnes by 1871. 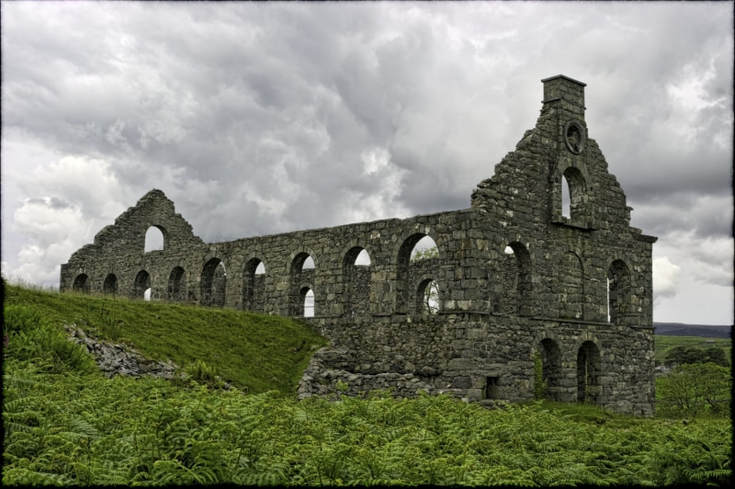 Ynys y Pandy
With it's high vaulted ceiling, church style windows, seemingly continuous leaden grey sky, and the throaty caw-caw of endlessly circling crows, Ynys Y Pandy mill more resembles the romantic ruin of a medieval cathedral than a factory. Which is fitting, as Ynys Y Pandy sits on land previously owned by the early medieval Augustinian priory at Beddgelert. After closure of the quarry the building was often used for religious services before Capel Saron was built in the 1880s (along with a small school) as well as several eisteddfodau, before the roof was removed in 1906.

It is important to emphasise the distinction in Welsh society between 'chapel' (Welsh; capel) and 'church' (Welsh; eglwys) The Anglican tradition in Wales (the 'Church in Wales') had long been associated with cultural 'Englishness' and 'landlordism' and for the 'aspiring' Welsh who spoke English by choice, even when their own language was fully understood and fluently spoken. In other words, attending church was a prime social indicator of influence and wealth. Because of this, until the 1700s the organised, state-sponsored religion of the church had relatively little impact on the lives of the majority Welsh-speaking tenant population of North Wales. John Jones, the Dean of Bangor Cathedral in the early 1720s, for example, referred to the Welsh peasantry's "ignorance and unconcernedness" in matters of religion. About 1730, however, a Nonconformist revival, initiated by Baptists and Methodists, swept through Wales. This revival lasted well into the period between the world wars and was characterised by the building of myriad plain, rectangular chapels, minus steeple or bell, in which fiery sermons voiced a disapproval of alcohol, gambling, dancing and games, and working on a Sunday. For fervent chapel goers this included a pacifist stance and a refusal to fight in wartime. What really marked the chapel culture out as different, however, and endeared the movement to the common people was that chapel services and preaching were done exclusively through the medium of Welsh (and still is for the relatively few chapels that remain). Thus, whereas in neighbouring England the various Christian denominations often cut across social divisions and to some degree neutralised them, in Wales the opposite was the case and social distinctions coincided with, and were intensified by, differences in both Christian denomination and language.

Arguably, the effect that chapel culture had on the native Welsh population cannot be overestimated and the chapel was, for over 150 years, the principle symbol of Welshness in every town and village in North Wales. The Sunday schools run by individual chapels taught many thousands of children and adults to read and write in Welsh long before primary schooling became universally available (and then available only in English, a policy which was rigidly enforced even at the local level). Indeed, a government report into the state of education in Wales in 1847 remarked that the Sunday schools were "the main instrument of civilisation in North Wales" and that "their schools, literature and religious pursuits ...have cultivated talents for preaching and poetry". Nevertheless, as with much faith-based education even today, a distinct narrowness of the curriculum was also observed, "but for every other calling they are incapacitated". Indeed in 1890 Dr John Roberts, quoted in a pamphlet entitled 'Peryglon i Iechyd y Chwarelwr' ('Dangers to the Health of the Quarryman'), observed that "........their 'education' is limited to such questions as "who was the first man" and other such useless rubbish."

It is fair to say that the chapels attempted to appropriate the enthusiasm for story-telling and music that the Welsh have in common with the other Celtic nations for their own religious and nationalist ends. With hindsight, however, they succeeded on only one front. While chapel culture has undergone a massive decline since the mid-20th Century, with the majority of chapels now lying dormant or sold on for private home conversions, the growth of a specifically Welsh political consciousness has had some success, and for several years in the early part of this century the nationalist party Plaid Cymru achieved coalition in the Welsh government. The threat of a rise in Welsh nationalism due to chapel attendance was apparent much earlier than this, however, with at least one local English landowner publicly insisting that her tenants become members of the Church in Wales or be made homeless. 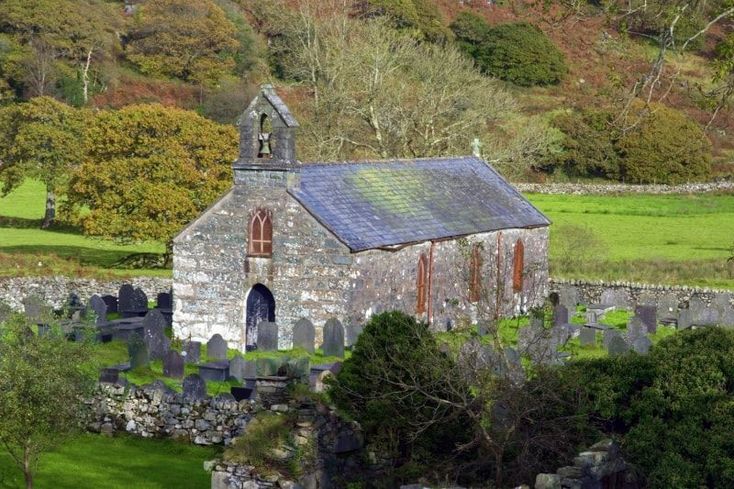 Llanfihangell Y Pennant
​This ready acceptance of separatism and discrimination between social and ethnic groups, in addition to ideological schisms, appears to be a hallmark of Christianity generally and so not confined to the Welsh scene. The faithfully preserved working museums that are the Anglican churches found in many English villages, usually many centuries old, readily attest to this fact. In addition to the handsome lychgates and intricately carved wooden rood screens, most churches have an area of wider, more comfortable wooden seating, again with intricate carvings often depicting a coat of arms. These seats, known as 'box pews' were reserved for the wealthier denizens and usually entranced through small wooden gates so they did not have to worship immediately alongside the peasantry. The majority of the inhabitants of Treforys were likely to have been monoglot Welsh-speaking chapel-goers although they had no local chapel to attend and would have felt uncomfortable and unwelcome at the nearest 'English' churches located either across country at Llanfihangel-Y-Pennant in the adjoining and much more lush Cwm Pennant, or by road at Dolbenmaen. They would have needed to travel even further on foot or, if they were lucky enough to own one, by horse and cart to one of the chapels in Porthmadog, a journey that would have probably taken up most of their one day of rest.

Nowadays what remains of Cwmystradllyn is a handful of scattered farmhouses which, when looking down from the surrounding hills appear  interspersed with the few modern houses that stand out like occasional lego bricks tossed at random onto the ancient landscape. One or two cottages seem scarcely used. One  even has two not-quite vintage Jaguars rotting away alongside. The quiet is all-pervading and it is possible to walk the length of the valley and see, perhaps, an occasional car and no-one else on foot. As my walk ends and I stroll back to my car through a cool sauna and the finest aerosol of drizzle, I think better to leave the place to those who disturb it least; to the bird-watchers, hikers and fishermen and anyone else who is happiest when sharing the quietude of this valley with the majestic soaring buzzard and the furtively dashing black crow. 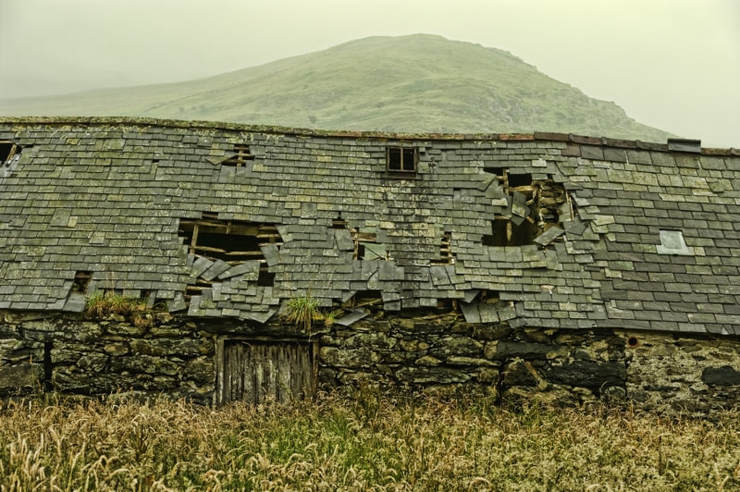 Cwmystradllyn
Original images and written content © Gary Hill 2013. All rights reserved. Not in public domain. If you wish to use my work for anything other than legal 'fair use' (i.e., non-profit educational or scholarly research or critique purposes) please contact me for permission first.