Desire the Horse, Depression the Cart 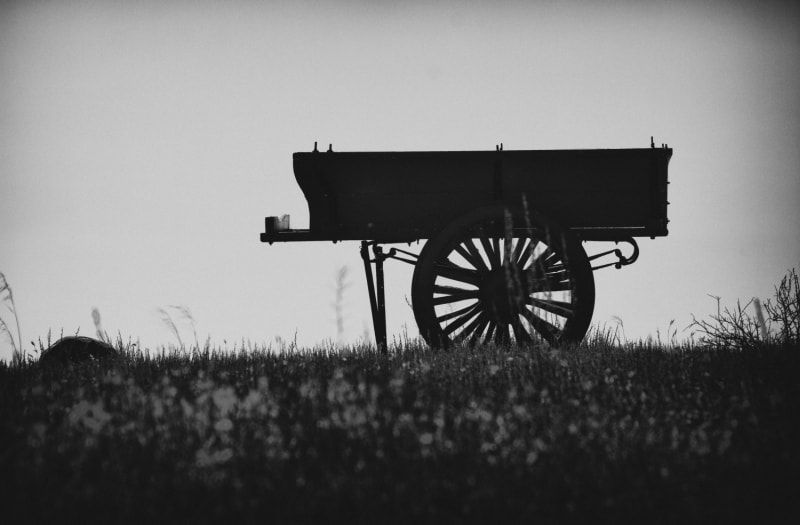 Extract from the poem 'The Book of Longing' by Leonard Cohen.


I have to admit to not being a big fan of Leonard Cohen's poetry. His music, though, is a different story. For me it's as if the words without the music just don't gel. I need his slow, deep rich, edgy, sonorous voice, dripping with the wisdom of the ages, to bring to life the symbols on the page. This poem is an exception, however, and the two simple lines "desire the horse, depression the cart" especially resonate. It's pure Buddhism of course, and was written during the several years Leonard Cohen spent as a Zen monk. It's a highly condensed version of the second of the 'Four Noble Truths' taught by the man born as Siddhartha Gautama and later to become known as Sakyamuni Buddha. The truths are deceptively simple:

To me the first two of the 'Four Noble Truths' are self-evident to anyone who has ever thought deeply and honestly enough about why human beings are so prone to experience emotional and psychological discomfort. The enthusiastic galloping horse of desire seems invariably followed by the leaden, slow moving cart of depression. The Third Truth which prescribes an opposite reaction certainly has a distinct plausibility, yet lacks sufficient evidence from my own experience to be fully embraced. The Fourth Truth, which further prescribes eight specific attitudes to living, though undoubtedly as fine a recipe for leading a virtuous life as you will find, is similarly not self-evident to me. So I limit my discussion to the first Three Truths.

That suffering exists is axiomatic, it is simply a human constant. Regardless of the actual cause, all humans without exception experience the suffering brought on by happenstance, our environment, physical illness, injury, pain and tiredness, and by an aging body and of course an eventual death. In addition we have to contend with psychological and emotional sufferings such as sadness, anxiety, fear, frustration, disappointment, and depression. It seems none of this can be circumvented. It is interesting to contrast the emphasis placed on this simple, direct, powerful and inherently veridical observation from Buddhism with the fundamental yet highly speculative claim of the monotheist religions of the “God is good, God is love, Allah is merciful” variety. Clearly, there is a distance here and, when the Epicurean Paradox from Ancient Greece is paraphrased, substituting ‘suffering’ for ‘evil’ a similar paradox emerges:

The logical contradiction is obvious. Because the fourth statement is undeniably true, one of the other three must therefore be false. Setting aside the theological just-so stories labelled as theodicy, the more direct logical consequences are either (i) the cessation of an individual’s suffering is beyond God’s capability, or (ii) God does not care whether we suffer, or of course (iii) as Buddhism certainly suggests, but never directly asserts, there is no creator God. While I can understand the reasons for hypothesising the existence of a creator god-like entity, I cannot follow the line of reasoning offered by many theists that such an entity is necessarily benevolent or merciful. It simply makes no sense to me either logically or evidentially and smacks strongly of mere wishful thinking. I address this point in more detail in my essay 'A Determined Critique of Free Will Theodicy'.

The second noble truth, as Leonard Cohen suggests, argues that suffering arises from the unbridled psychological and emotional attachment to our chosen objects of desire. No matter how much we enjoy something we are forced to moderate our exposure to the joyful stimulus. Unfettered consumption is always eventually problematic, whether it is of physical exercise, icecream, heroin or music. In addition, because both ourselves and all of the objects of our attachment are transient and inherently impermanent, it is inevitable that we will eventually suffer their loss also. Flowers wilt, the in-the-moment ecstasy engendered by a piece of music or poetry cannot be reliably emulated or repeated and the endorphin-fuelled high produced by physcial activity eventually gives way to exhaustion.

It is important to appreciate that susceptibility to attachment does not mean that we should not enjoy the world. Attachment manifests, not as the mere experience of enjoyment itself, but with the subsequent cultivation of an attitude that demands that reality stay as it is at a point of peak enjoyment, that is, an unwillingness to accept the impermanence of reality. Thus, an unreasonable sense of entitlement to particular manifest qualities of reality results. The atheist author Greta Christina captures this idea particularly well when she writes:

".......it means letting the world flow through me, instead of trying to hang onto it and keep the good bits in a jar”.

I am reminded here also of a work by the Welsh poet R S Thomas, entitled ‘A Marriage’:

We met
Under a shower
Of bird-notes.
Fifty years passed,
Love’s moment
In a world in
Servitude to time.
She was young:
I kissed with my eyes
Closed and opened
Them on her wrinkles
‘Come’ said death,
Choosing her as his
partner for
The last dance. And she
Who in life
Had done everything
With a bird’s grace,
Opened her bill now
For the shedding
Of one sigh no
Heavier than a feather.

Certainly one of the most beautiful poems I have ever read and a verse that encapsulates the Buddhist view of physical impermanence so well. Although R S Thomas is telling us of the death of his wife there is no sense of depression, of mourning, in this poem. He simply accepts the situation. Rather, it is descriptive and celebratory of her life. Ironically, R S Thomas was not Buddhist but a minister of the Anglican Church in Wales. I wonder if he realised he was illustrating the Buddha’s Third Noble Truth? I'm sure he's have no problem with that. His natural acceptance of impermanence is integral to the Buddhist worldview. Nothing at all, in or outside of this universe, remains a constant. Again, this contrasts starkly with the monotheistic view. Although Christianity and Islam, for example, naturally recognise the impermanence of physical matter and the material universe, a belief in the inherent permanence of god and soul remains a crucial component of the theology. In Buddhist thought, however, phenomena at all levels of reality are impermanent including all nonphysical reality, whether conceived as perceptions, beliefs, thoughts, souls or gods. The concept of ‘self’ is no exception. The view of individual ‘selves’ as essentially autonomous entities that change in response to environmental and perhaps mental stimuli is challenged by the Buddhist synopsis of the ‘self’ as nothing more or less than an impermanent aggregation of interrelated causal processes at a particular point in time. These processes are considered devoid of any permanent spiritual core and often portrayed as either ‘none-self’ or ‘not-self’. Though not a Buddhist himself, Jiddu Krishnamurti adds to the concept with his phrase “living and dying from moment to moment”.

This popular Buddhist conception of the ‘self’, however, is actually a simplistic version of Buddhist philosophy. The Buddha did not teach the concept of ‘none-self’ or ‘not-self’; his approach was more cautious and subtle. The one time he was specifically asked about the status of the ‘self’, it is said that he refused to answer. When later asked why, he said that to hold either that there exists a ‘self’ or a ‘not-self’ is to fall into a philosophical trap, as the very concept of ‘self’ is illusory. This is a valid point. No matter how ‘self’ or ‘not-self’ are defined, harbouring the very notion of ‘self, positively or negatively,’ is surely predicated on an element of self-identification and therefore of psychological attachment which, as we have seen, is the royal road to suffering.

Whether ‘self’ is illusory or not humans are reliably observed to naturally act in an opposite fashion to the advice given in the Third Truth and to pursue strategies attempting ‘self-permanence’. In monotheist-based cultures, for example, people immerse themselves to varying degrees in the belief that we can never truly die. Many also try to indelibly stamp their attitudes and values on their children. Or we seek others who share our attitudes and values by participating in political and/or religious institutions in order to influence society at large. In the case of religion, this sense of shared values and beliefs usually comes at a price. Many people claim to hold to both religious belief and rationality but logically it is impossible to be equally effective at both, as one relies heavily on faith while the other relies heavily on logic and/or empirical evidence. Eventually something has to give, and this is evidenced by a dearth of fundamentalist religious believers in the laboratory and a shortage of those unwilling to submit their lives to faith in the pulpit.

The Christian notion of Heaven and the Islamic ideal of Paradise can be considered as prime examples of a ‘self’ concept with attachment to a nonphysical object because, in the absence of direct evidence, an afterlife is an irrational belief. It encompasses a desire to not only achieve ‘self-permanence’, but the same permanence for other ‘selves’ with whom attachments have been forged. In a similar way some believers in an afterlife can be observed to demonstrate what Chogyam Trungpa has labelled ‘spiritual materialism’, by holding attachment to their accumulation of piety or good deeds that they believe will enable safe passage to their afterlife. To a Buddhist, never mind the comfort these beliefs may bring; ignorance too is rightly considered a form of suffering.

Note that I have discussed the first three truths of Buddhism in isolation from the Fourth Truth and other concepts fundamental to Buddhist philosophy such as karma and rebirth. There is a reason for this; they are mere speculation. There is no evidence for the existence or efficacy of these mechanisms and so they are yet to hold any explanatory power in my worldview. And this illustrates another difference between Buddhism and monotheism. In Buddhism, this attitude is perfectly acceptable. The Buddha said:

While it is generally considered nonsensical or even heretical to speak of being semi-Muslim, or half-Christian, for example, it is perfectly acceptable to consider oneself to be a little-bit Buddhist. As I happily consider myself when reading Leonard Cohen’s succinct verse ‘desire the horse, depression the cart’. But by doing so, have I too fallen into the trap that the Buddha warned against? ​ 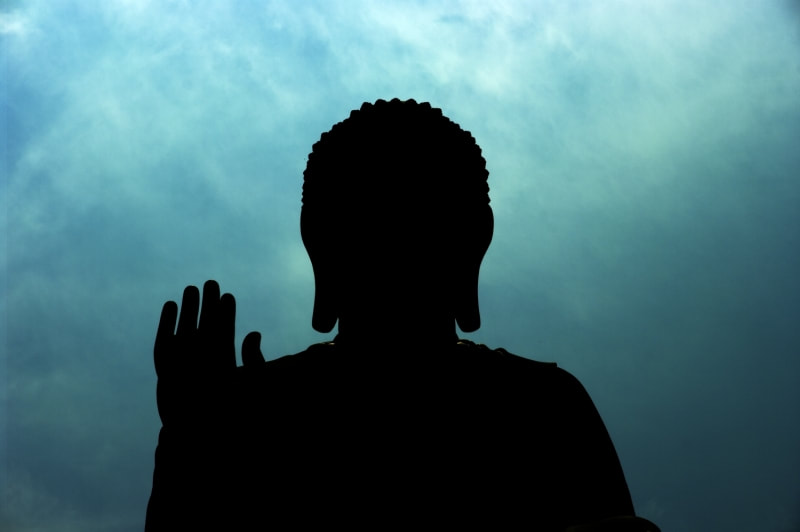 ​Original images and written content © Gary Hill 2015. All rights reserved. Not in public domain. If you wish to use my work for anything other than legal 'fair use' (i.e., non-profit educational or scholarly research or critique purposes) please contact me for permission first.